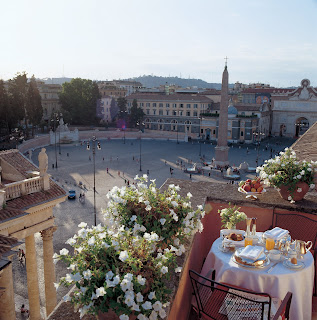 HOTEL DE RUSSIE, , ITALY
A hip and sleek hotel on the Via del Babuino in Rome, it’s just a stone’s throw away from the Spanish Steps and ideally situated to wander along from Via Condotti to Vatican City.

An exclusive address, it’s where Cate Blanchett, Robert De Niro and Bono like to stay. It was also home to Brad Pitt and the cast of Ocean’s 12.

At night, twinkling lights give a fairytale like atmosphere in the inner garden, which even has a Butterfly Oasis. Inside, beautifully designed rooms in muted colors mix contemporary style with traditional sophistication. The all blue health club and spa is the fashionable place to get spoiled with a sparkling mosaic pool, jaccuzzi, sauna, steam bath and especially appetizing beauty treatments like the delicious Coffee-based body massage.

For a romantic nightcap al fresco, on a warm balmy night, head to the magical terrace, or nip into the Stravinskij bar where George Clooney belongs to the martini club.

GROTTA GIUSTI SPA, TUSCANY, ITALY
A 19th Century villa packed with antiques is set a few miles from Florence in Tuscany. All cosy velvets, marble features and grand lounges, it has a natural chic.

The Grotta Giusti’s claim to fame is its natural thermal water. Discovered in 1849 and rich in bicarbonate, sulphate, chloride, magnesium and calcium, the 34 C (93 F) waters are said to cure everything from muscular to cardiovascular problems. Don’t miss the sauna-like grotto, dubbed ‘the eighth wonder of the world’ by Giuseppe Verdi. Split into three rooms, Paradise, Purgatory and Hell, the 100% humidity grottos get increasingly hot. There’s also a modern Wellbeing Center with a thermal swimming pool and treatments covering everything from the ancient to the cutting edge, from Swedish to Shiatsu. And of course, if you don’t fancy the pampering, there’s a tennis court and a gourmet restaurant too.

There’s a feeling of exclusivity as you walk the hotel’s red carpet towards the sleek rooms which are definitely 21st Century with snazzy lights and a sleek B&O flat screen TV. Ghery’s personal touch is everywhere: from the B&B leather sofas to the bright red Ligne Roset ‘pop’ chairs.

Get an invitation to the extraordinary ‘cathedral of wine,’ a spooky ‘crypt’ where 16,000 vintage bottles lie, or simply sample the wine with a view from the spectacular rooftop lounge. Try the Basque Riojan cuisine like ‘meatballs with truffle’ or try the wine another way: at the Caudalie Vinotherapy spa where a beautiful pool awaits and one can soak in a giant ‘barrel-shaped’ Jacuzzi.