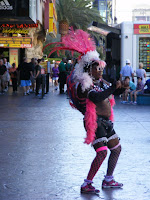 This week we have a fantastic blog from Jo Thoenes from BBC Radio Oxford who recently travelled to Nevada and Arizona. Here is the account of her experience:

All too often when planning a holiday we strive for that unique experience. ‘Oh we just HAD to get off the beaten track’, we wail. ‘It was so special to see the REAL country’ we confide. But for me, a Fly-Drive holiday to Arizona was all about embracing those stereotypes others strive to avoid, clasping those clichés to my heart, and topping it all off with a massive ‘Yee-haaaa’.

Starting our road trip just over the border in Nevada, we flew into McCarran International, the first port of call for most international visitors to Las Vegas. Disregarding any notion of jet lag we hit the strip running. With the luxury of being able to stay in the entertainment capital of the world mid week we found great rates on hotels, although there is no way things could be described as quieter. This is a 24-hour town, and visitors might be reminded that they will need to sleep at some point.

There is plenty to spend your money on. Shows, casinos, restaurants and any manner of garish souvenirs. But there is just as much to see and do on a shoestring. Stroll in and out of hotels; revel in their over the top splendour. The Venetian, compete with indoor canal and gondolas; Paris – with its own Eiffel Tower, or the older establishments; former mobster Bugsy Siegel’s The Flamingo, or even the intersection outside Caesar’s Palace where Elton John’s visage beams down on you, promoting his new residency.

But our plan was to travel, and there was only one car for the job – cue our next big cliché: a White Ford Mustang convertible. Good-bye Vegas, hello open road…

Crossing into Arizona via the Hoover Dam, the temperature soared and we headed into cowboy country. Grand Canyon Ranch has a long and colourful history. Its first inhabitants date back three and a half thousand years, next came the Mormon settlers; outlaw-turned-rancher Tap Duncan –and then a modern twist. Under the ownership of former British Army officer Nigel Turner, a slice of cowboy life is served up to tourists with lashing of western charm. Accommodation is provided in authentic pine cabins or traditional tipis, there are wagon and horseback safaris on offer, a mini ‘showdeo’ to introduce visitors to this special way of life, and even a singing cowboy to serenade you through dinner. But it was the chance to ride on out of the range under the guidance of real deal wrangler ‘Boot’ Gilg that took the biscuit. Exploring 165 square miles of ranch on horseback, with turn of the century copper mines, spectacular views and wild coyotes skipping in and out of the shadows, was the stuff of childhood fantasy. We camped out that night, horses tethered near a roaring campfire, the Milky Way above us, and that lone coyote singing us to sleep from the next ridge. 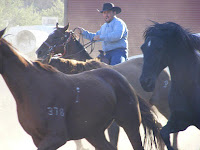 But we couldn’t stay there forever, and after a short ride back to base in the morning via the resident bison, we were back on the road…time to get our kicks on Route 66.

Despite its legendary reputation, Route 66 is an unassuming road. But with its ghost towns, derelict gas stations and vast expanses it fits the bill. Williams is a survivor town however – steeped in Americana – and who could resist a meal at Seligman’s Roadkill Dinner? 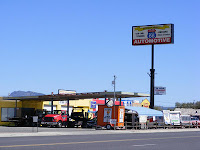 Approaching Grand Canyon National Park I was worried that I might be under whelmed by the ‘grandness’ of it all. But the 17 million years through which the Colorado River has snaked the base of this epic flaw in the earth’s crust has produced something that deserves to be described as ‘awesome’. With 101 ways to explore the South Rim – hiking trails, cycle routes, burros, and helicopters to hand there is no reason not to see the canyon up close for yourself. The only problem is, the more you look, the more you want to see…and there is so much too see – from the geology, to the flora and fauna and the breathtaking sunrises. 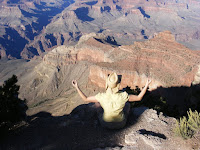 Heading east along Route 64 – the Eastern Scenic Drive, it was towards Navajo country we headed next. As the skies become bigger, the concept of our next stop at Lake Powell began to take shape. In the 1960s 150 miles of the Colorado River was dammed at Glen Canyon to create not just hydro-electricity but also a recreation mecca for water sports lovers in this arid desert land. Twenty years after the dam construction was finished, the Glen Canyon bath-tub filled for the first time – and you can but wonder what secrets lie hidden beneath the surface. So we took to the water to explore – heading for Rainbow Bridge, an Arizonan proclaimed eighth wonder of the world on a half-day cruise. A sacred native American site, and spectacular piece of natures architecture, the sandstone arch re affirms any feelings of insignificance we had already eperienced…feeling small never felt so good! 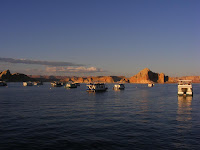 But for anyone who ever played cowboys and Indians, for anyone who ever cantered around their living room whilst a Sunday afternoon western played on TV it is Monument Valley you want to experience. As the looming buttes and messas appear on the Arizona/Utah border, you can’t quite explain why an Ennio Morricone sound track is playing in your ears. This is the land that John Ford used to create a cinema going public’s impression of the Wild West. Stepping out amongst the rich red rock formations felt strangely like coming home…but where was John Wayne when you needed him? 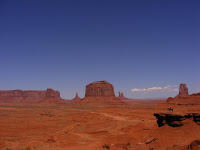 Having booked to drop off our hire car in the state capital of Phoenix it was time to head south – past Flagstaff, through ponderosa pine forests and towards Sedona – a town built on apple and peach orchards in the late 1800s but now a haven for artists and new-agers. Any number of historic towns dot the landscape here – and one definitely worth visiting is Jerome – whose many faces have included copper mining boom town, desert ghost town and now quirky Victoriana. With a friendly saloon and colourful history of prospectors and party girls, it’s easy to lose a day on this hillside community.

So how best to describe Arizona? It is everything I dreamt of and a little bit more. It was big, it was bold and it told the most amazing stories. And I like to think she might invite me back for more one day…

Listen to Jo on BBC Radio Oxford every weekday from 1pm – 4pm.  Our MD Niall Douglas joins Jo in the studio on the first Tuesday of every month to discuss all things travel.