Planning for the London Olympics 2012

The countdown to the London 2012 Olympics is well underway and it’s essential to understand the impact this could have on your business.   London’s population is set to explode in July next year as spectators from around the world converge on the city to celebrate both the Olympic and Paralympic Games.  The increase in demand for services as a result of the Olympics and other major events happening from June to September will affect the cost and availability of travel.
Key Dates
What should we expect?
8.8 million Tickets are available during the 16 day Olympics and a further 2 million during the 11 day Paralympic Games.  These will be hosted in 34 venues across Greater London.  We must also remember other major events will be occurring.
Currently there are 3 million daily journeys made by residents and visitors on the London Underground system.  During the games London’s transport system will have to support an estimated 20 million extra trips.  It’s expected that on the busiest day of the games, the city’s transport systems will have to absorb up to three million additional trips made by spectators commuting to Olympic events.
The Impact
Availability and cost will be two major concerns during the Olympic period.
Demand could out strip supply leading to increases to air travel, ground transportation and accommodation costs.  This is especially true on the lead up to the games as availability closes out.
Air Travel
Inbound traffic to London is expected to increase during the games.  However we may see discounts on flights out of London as the airlines try to fill the seats.  Some airlines are considering extra capacity and this could lead to ‘Early Bird’ specials.
Rail Travel
It is estimated that 80% Olympic Games spectators will travel by rail including the underground.
However, early feedback on Olympic event tickets sold, indicate that a relatively small percentage have been purchased by people living outside London and the south of England. This means that it is likely that fewer numbers of people will be travelling to the games by rail from the north than originally anticipated.
The key long distance Train Operating Companies (TOCs) running services from the north to London expect to have capacity for business travel during the Olympic period. Additional services are being run in the morning peaks to cope with the extra demand for Olympics visitors. The evening business peak for business travellers leaving London are not expected to be affected, as the bulk of the Olympics traffic will leave London much later, and extra services are being provided to cater for this demand.
TOCs will also be making sure that there is extra staff presence at key stations to give advice and assistance, especially to games visitors who do not travel regularly, and to ensure that passenger board and leave trains safely and that trains depart on time.
Rail services running on the dates between the main Olympics and the Paralympics are likely to be very quiet, and it is anticipated that travel will not be affected at all during the Paralympics.
Main London stations will be busier than normal, with a number of very busy rail hotspots including,
Accommodation
Hotels in central London are required to allocate a number of bedrooms to the London Organising Committee of the Olympic Games and Paralympic Games (LOCOG).  This on average was 70% of their rooms, LOCOG however are expected to return un-sold allocations to hotels during 3 periods in 2012.  January, February and April, only then will we get a clear idea to pricing and availability.  We have been given some indications that prices on average will be around 20% to 40% higher than normal.  Some hotels will also be asking for minimum stays and will implement much stricter cancellation rules.
Road Network
As central London is home to several competition venues, during the Games there will be a number of changes to road usage within the ‘Central London Zone’.  A number of road races will also affect traffic, e.g. the marathon and triathlon.
Key Areas
The map below demonstrates the key ‘travel hotspots’ where junctions and routes will see the most traffic increases during the Olympics and Paralympic Games. 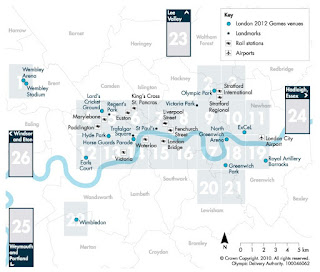 However it should be noted that the effects on the games will potentially be felt across a much wider area than directly around the venues themselves.
This map can be found here, where detailed information on specific areas can be downloaded.
Recommendations for Domestic Travel
Recommendations for International Travel
Useful Links
The official games site  http://www.london2012.com/
Heathrow airport guide  http://www.heathrow-airport-guide.co.uk/olympics-2012.html#d
Transport for London    http://www.tfl.gov.uk/gettingaround/21015.aspx
Travel Advice    http://www.london2012.com/publications/travel-advice-for-business-handbook.php
Handbook
Email Updates          london2012.com/traveladviceforbusiness
Planning short distance walks  walkit.com — London