Puglia - The Heel of Italy - Italy

With private car transfers throughout, this itinerary combines unique Matera, just across the border in Basilicata, with two of Puglia’s most beautiful towns. Start with three nights in Matera discovering cave dwellings and rock churches before moving on to Locorotondo for three nights. Experience the traditional Puglian lifestyle in this white-washed town with its unique spiral streets and relaxed atmosphere before heading south to Lecce for four nights. The ‘Florence of the South,’ this is one of the best preserved Baroque towns in Italy, renowned for its elegant palaces and churches carved from honey-coloured stone.

‘Albergo Diffuso’, meaning a scattered or spread-out hotel, refers to an increasingly popular form of accommodation whereby guests stay in a series of apartments dotted throughout a characterful town, and experience living in close contact with residents rather than tourists.

The Sextantio Le Grotte della Civita hotel is located in the oldest part of the Sassi quarters overlooking the spectacular Murgia park and its rock-hewn churches.

Built by the architect Mauro Manieri in the 18th century, the Patria Palace has a wonderful location in a small square opposite the elaborate Baroque façade of the Santa Croce basilica. 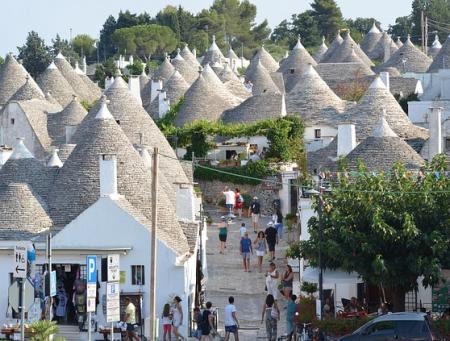 ‹ ›
What's included
Guide price per person,
based on the shared occupancy of a twin/double room. Supplement for single occupancy rooms will apply. Insurance is not included
All prices and details are subject to change and availability.  Terms and conditions apply.
Trips to Italy

A Grand Tour of Italy

An All Encompassing Italian Adventure Galvanised by the cosseting hotels and unrivalled cuisine, th...More »

SUMMARY Imagine carefree days sailing from one stunning island to the next through the glistening Me...More »

SUMMARY Lace up your boots and set your eyes to the spectacular and sparkling Mediterranean horizon ...More »

SUMMARY Lose yourself in three of Europe's most enchanting countries. From the vibrant streets of Ba...More »

Dramatically set below the ancient amphitheatre, overlooking the medieval rooftops of Tao...More »

Michelangelo himself is said to have had a hand in the design of the Villa San Michele, a...More »

Built in 1830 as an aristocratic family home, this secluded retreat still retains all the...More »

If the first thing that comes to mind when you hear “Sicily” is "The Godfather” we’re here t...More »

Make enquiry For Puglia - The Heel of Italy